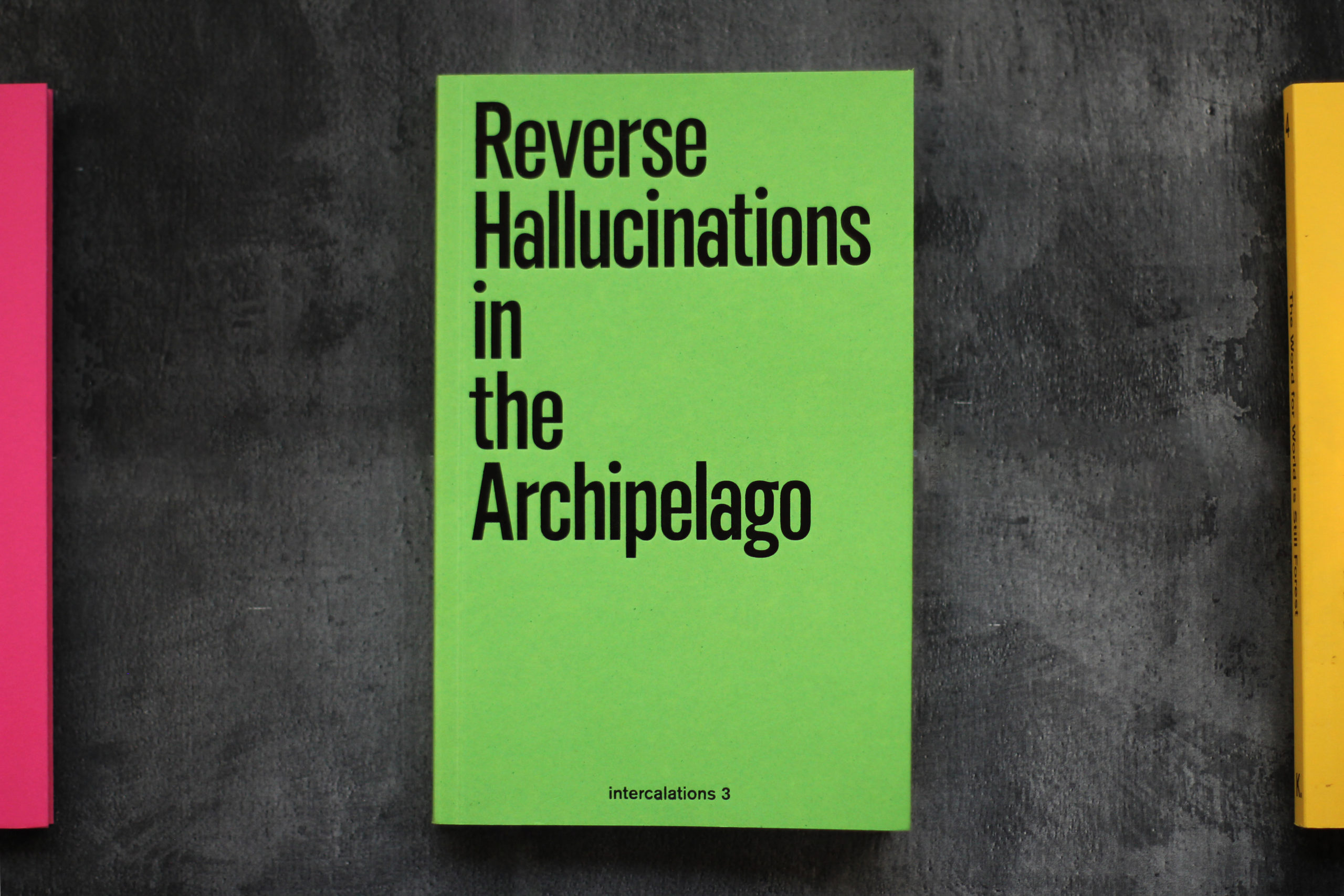 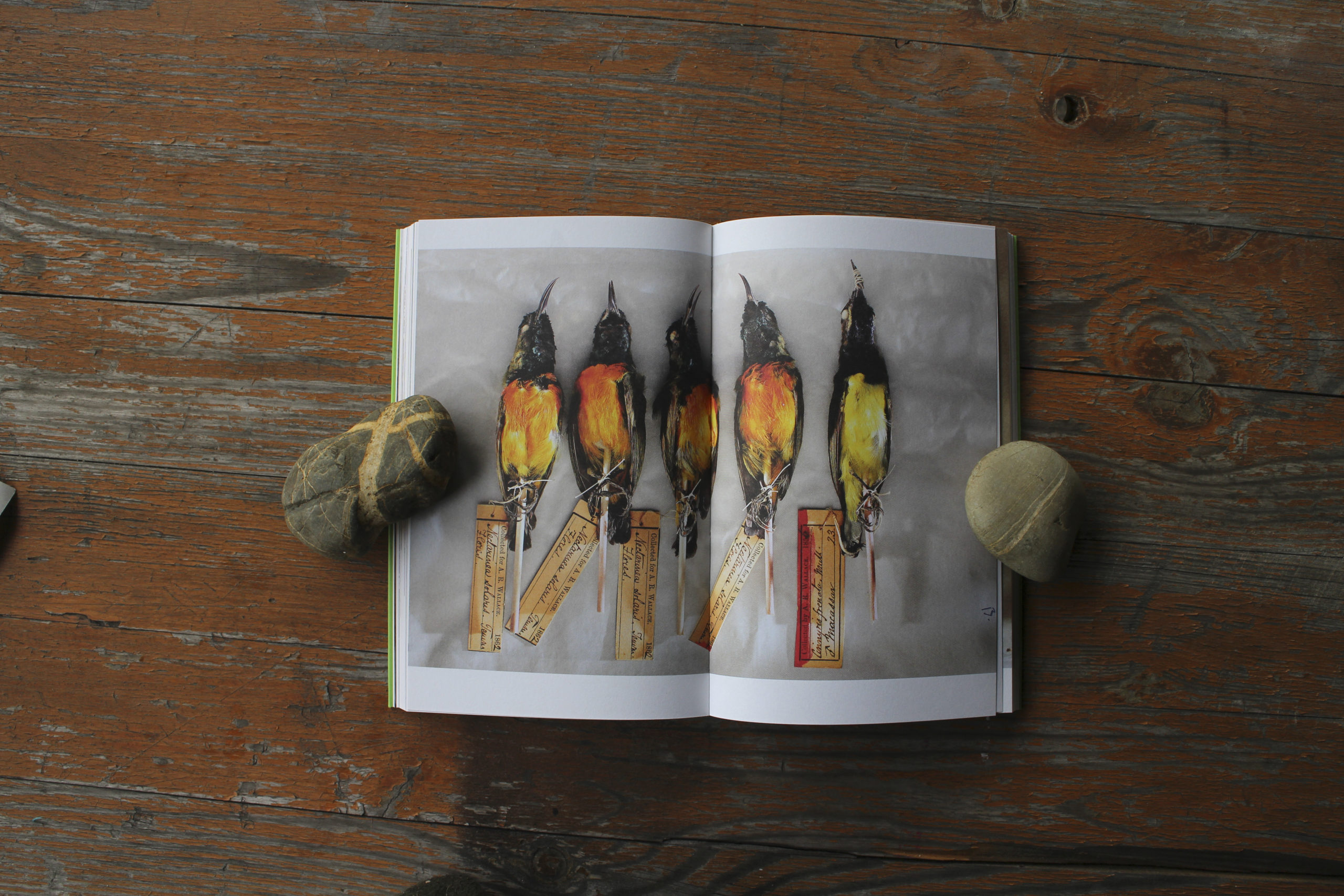 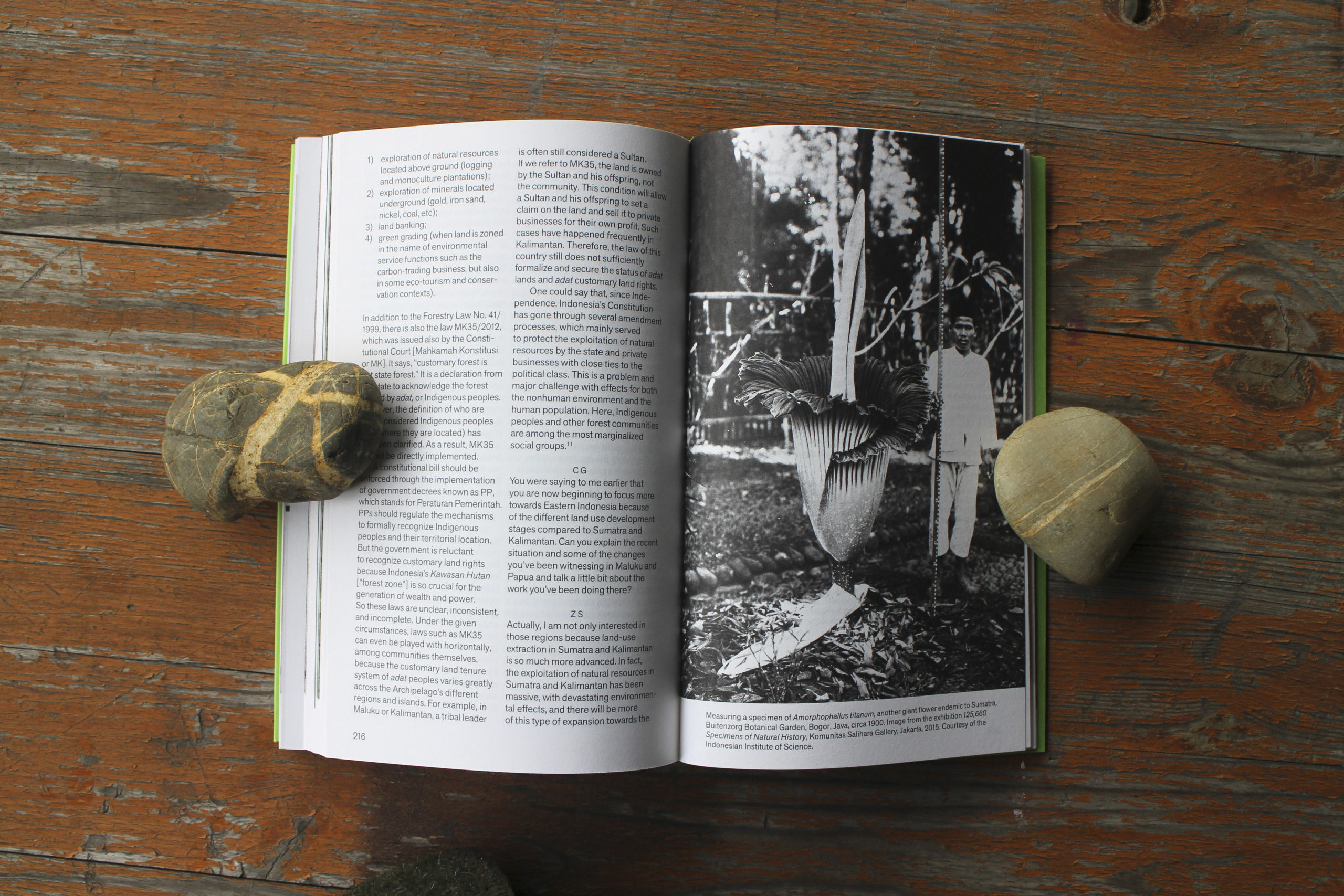 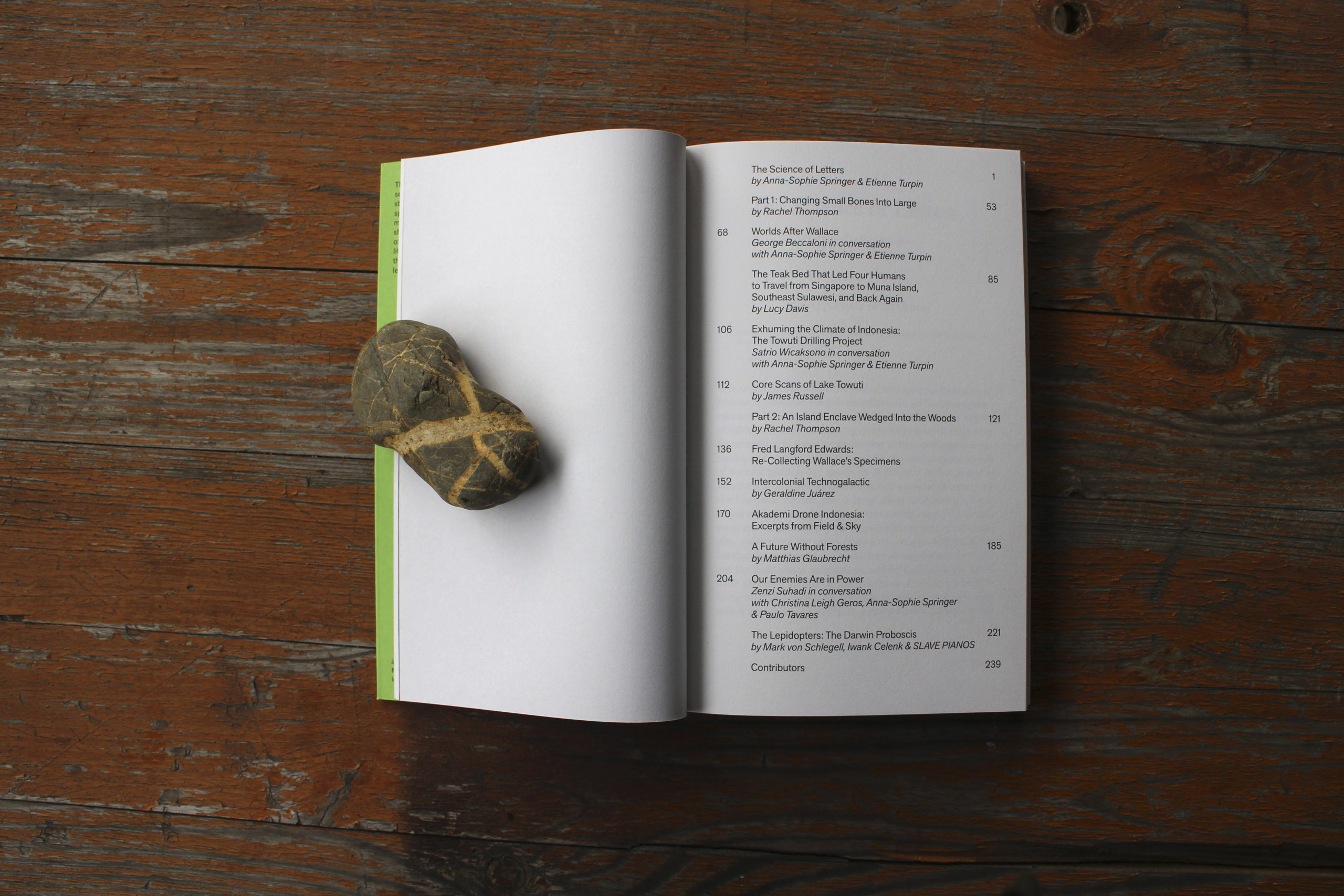 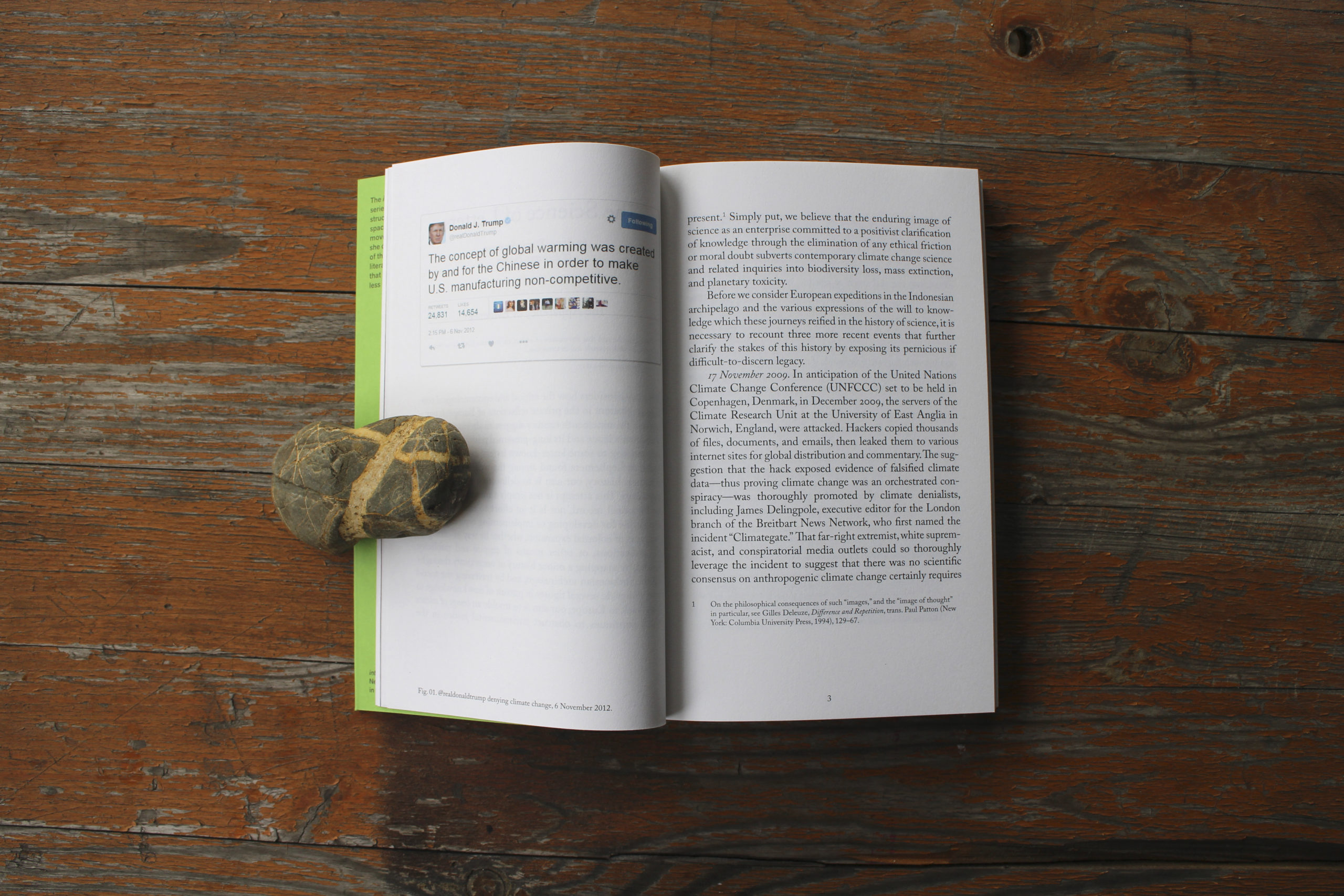 Reverse Hallucinations in the Archipelago – SOLD OUT

intercalations 3 … unfolds an itinerant encounter with nineteenth-century European naturalists in the Malay world, where the theory of evolution by natural selection emerged alongside less celebrated concerns about mass extinction and climate change; by re-considering the reverse hallucinatory condition of colonial science in the tropics—how scientists learned to not see what was manifestly present—the reader-as-exhibition-viewer may exhume from the remains of this will to knowledge an ethical conviction of particular relevance for confronting forms of neocolonization in the Anthropocene.

Reverse Hallucinations in the Archipelago reflects on the changing role of colonial natural history collections in the current ecological crisis called the Anthropocene. The volume features a major essay by the editors that reconsiders the histories of scientific publications and personal letters sent by European naturalists from the tropics in order to discern a schizophrenic dilemma at the core of the colonial-scientific project. The book also includes a science fiction graphic novella by Mark von Schlegell, Iwank Celenk, and the SLAVE PIANOS (together with the Indonesian punk band Punkasila) about a futurist entomological meltdown. Photographer Fred Langford Edwards presents a series of works documenting tropical specimens held in the natural history collections of the British Natural History Museum, while artist Lucy Davis uses DNA tracking and oral history to retrace the path of teak furniture from Singapore to Indonesian plantations. Also featured in the collection are interviews with the entomologist George Beccaloni, who is also the director of the Alfred Russel Wallace Correspondence Project, as well as the geologists James Russell and Satrio Wicaksono, who discuss, respectively, the history of biological specimen collecting in the context of a drilling project in Lake Towuti (Sulawesi) that recently obtained soil samples containing 800,000 years of Southeast Asian climate history. To compliment these pieces, musician and writer Rachel Thompson adds a two-part essayistic composition relaying the Javanese osteo-mythology of the Dutch paleoanthropologist Eugène Dubious. The volume also includes an original translation (from German) of a text by Matthias Glaubrecht, director of the Center for Natural History in Hamburg, which outlines the maddening rate of species extinction in the rapidly transforming Malay world. Zenzi Suhadi, Head of the Department of Research, Advocacy, and Environmental Law at the Indonesian non-governmental organization WALHI/Friends of the Earth, also discusses the detrimental role of monocrop plantations, especially oil palm. A series of drone photographs by Akademi Drone Indonesia, a group of young environmental activists from Nusantara, documents controversial land-grabs in the region, demonstrating the ongoing environmental violence that is perpetuated for profit.

Published by K. Verlag and the Haus der Kulturen der Welt in June 2017