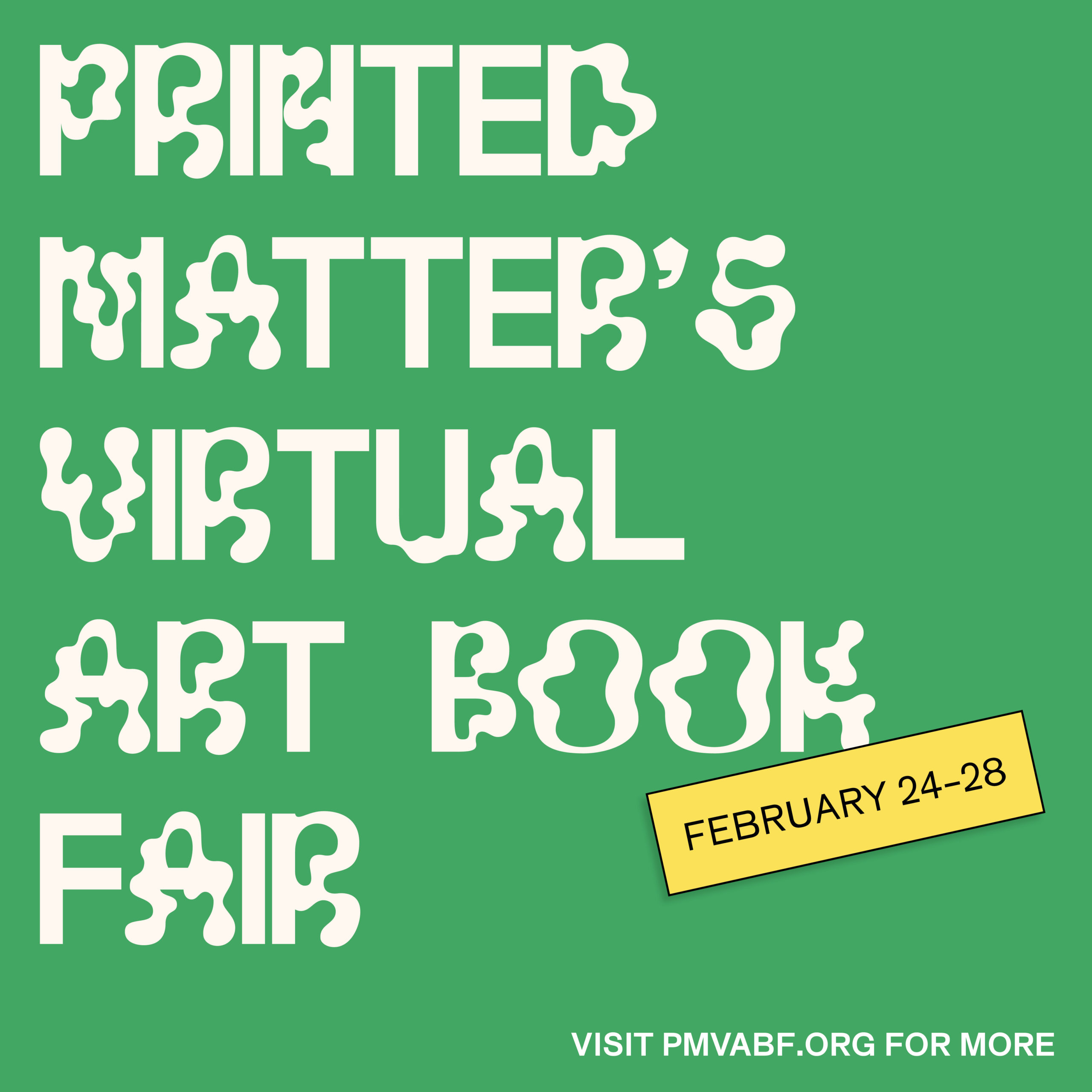 K. Verlag is participating for the first time in the Printed Matter Art Book Fair!

On 24 Feb, Printed Matter, the legendary New York space for artist books, launched its first Virtual Art Book Fair (PMVABF), presenting more than 400 exhibitors from over 40 countries. Held shortly after the 15th anniversary of the inaugural NY Art Book Fair, this online Fair gathers PM’s NY and LA Art Book Fair communities and expands the Fairs’ reach to welcome more exhibitors and visitors than ever before.

Over the course of the next four days, PMVABF will be a gathering place for visitors to learn about and purchase books from all around the world. After such a very strange year we are truly excited to present our virtual “booth”; it was designed and built by two formidable young designers, Ginny Rose Davies and Megan Ricca from London, who recently completed a joint internship with K. Verlag. In addition to presenting six (!) new titles we offer a great selection of prerecorded multimedia content, such as artist films by Joel Tauber and Dora García, and sound pieces by Allen Weiss, Kleine Humboldt Galerie, and others. We've also prepared a free program of daily live events, including book talks, a workshop, Q & As, and music, featuring Anette Baldauf, Ruth Estévez, Sílvia das Fadas, Dora García, Hanna Mattes, Naomi Rincón Gallardo, David Rothenberg, Paulo Tavares, and others.

The past year has been challenging for the field of independent and artists’ publishing. We’re grateful and excited for Printed Matter to take the chance to bring this worldwide community together to uplift the important work of both new and longstanding exhibitors. Join us all for one of the largest international gatherings yet in celebration of artists' books and art related publishing. Even though it’s online we are absolutely looking forward to seeing you!

Take the opportunity to watch Joel Tauber's sublime film Sick-Amour, 33’22”, 2010, in full length via our booth. The documentary tells the love story celebrating the forlorn and lonely tree that Tauber adopted in the middle of a giant parking lot in Los Angeles. The film is one part in a multi-part project; Tauber's essay "Sick-Amour" is a chapter in intercalations 5: Decapitated Economies.

Joel Tauber is an activist, artist, and filmmaker. He sparks discourse and facilitates change via direct actions and interventions, video installations, films, photographs, public art, podcasts, and written stories. The film is streamed with the kind permission of the artist.

In conjunction with the Book Talk on 25 February, you have a 24-hour special possibility to watch Dora García’s film Love with Obstacles, 60', 2020. Love with Obstacles focuses on the extraordinary author, Marxist feminist, October revolutionary, political exile and diplomat, Alexandra Kollontai (1872–1952). The film dives into the conservation of her legacy in Moscow archives, what has been told and untold, and her vision of the future of a socialist feminist revolution. It is streamed with the kind permission of the artist and Auguste Orts, Brussels.

Dora García is an artist, teacher and researcher who draws on interactivity and performance in her work, using the exhibition as a platform to investigate the relationship between artwork, audience, and place. Her work was shown in major museums and biennales around the world. She has also published various books, including, with K. Verlag, On Reconciliation, a publication dealing with the relationship between Hannah Arendt and Martin Heidegger that was awarded a Stiftung Buchkunst Prize in 2019. She lives in Oslo and Barcelona.

Love with Obstacles: (Amor Rojo) brings together Dora García’s collaborative research on the life and legacy of Alexandra Kollontai (1872–1952)—Marxist feminist, October revolutionary, political exile and diplomat. From 1922 to 1945, Kollontai was a Soviet ambassador in various countries, including Mexico. The writers in Love with Obstacles (2020) revisit Kollontai’s time and encounters in Latin America while drawing an arch to later and contemporary feminist struggles. It is recommended reading for anyone interested in learning more about the early and longstanding roots of contemporary intersectional feminism—as well as for those who believe that love holds a sociopolitical power. This event is the first moment that all contributors will gather to present the book as a group. The presentation will introduce both Kollontai, the book as well as look to current feminist issues in Mexico and García’s forthcoming iteration in Mexico.

LAUNCH. Despite Dispossession: An Activity Book
by The Willful Weeds Research Group

Celebrate the first new title of the year in a workshop on itinerant practices of resistance led by the Willful Weeds Research Group. What are the stories we want to tell and retell within life worlds under the threat of extinction? Which stories do we want to listen to, when transnational extractivism, state violence, new forms of war and neofascist politics expand dramatically around the globe? Despite Dispossession: An Activity Book brings together seven site-sensitive engagements with communities fighting dispossession; the book explores tools and activities to restore and reinvent bonds of reciprocity with the land, humans, and non-humans. For the workshop, the Willful Weeds Research Group made a video that documents their working process, and following this screening, they hope to engage in a discussion on art’s possibilities to confront dispossession through itinerant practices of resistance.

We will reschedule the conversation with Paulo Tavares for another time soon!

With his book Des-Habitat, Brazilian architect, activist, and curator Paulo Tavares intervenes in Lina Bo Bardi’s Habitat and shows how the 1950s-magazine’s modern visual language functioned as a framing device to conceal its own coloniality.

In December 2020, Tavares was a keynote speaker for the symposium The Coming South: Struggles, Epistemologies, curated by Marina Otero and Angela Dimitrakaki at Het Nieuwe Instituut. Unfortunately, the presentation was interrupted almost immediately due to a bad wifi connection. K. Verlag is pleased to share Paulo’s lecture, “Reparation Architecture,” on the occasion of our publication of the second edition of Des-Habitat. The video stream is followed by a live Q & A. Tune in!

Paulo Tavares is an architect and urbanist. He is the founder and director of autonoma, an agency dedicated to exploring the frontiers between architecture, visual cultures and social activism. Currently, he holds an Adjunct Professor position at the Faculdade de Arquitetura e Urbanismo, Universidade de Brasília. In 2019 he was co-curator of the Chicago Architecture Biennial “And Other Such Stories.” He is based in Brasília.

PERFORMANCE. Take Me to That Landscape

We conclude our book fair program by bringing together spoken word and music; after six months of experimenting remotely between Berlin and NY, Hanna Mattes & David Rothenberg will give their first live performance. In this unique collaboration, they try to break through the “meaninglessness” of nature to find truth, beauty, contact, and love in a world where invisible species are constantly trying to lure us beyond our mere humanity.

Hanna Mattes is a pioneer in analogue photography and a fantastical astronomer. She explores the boundaries of photography, leaving space for mystery, while her work maps out aesthetic inventions. She has had exhibitions and artist residencies worldwide. In 2019, she published her second photo book, The Lunar System, with K. Verlag. Her latest work explores poetry and sound.

Musician and philosopher David Rothenberg is the author of numerous books including Why Birds Sing and Nightingales in Berlin. He has performed or recorded with Pauline Oliveros, Peter Gabriel, Ray Phiri, Suzanne Vega, Scanner, Elliott Sharp, Iva Bittová, and the Karnataka College of Percussion. His new chapter “Among the Nightingales in Berlin” is published in intercalations 6: These Birds of Temptation, out with K. Verlag in March 2021. Rothenberg is Distinguished Professor at the New Jersey Institute of Technology.