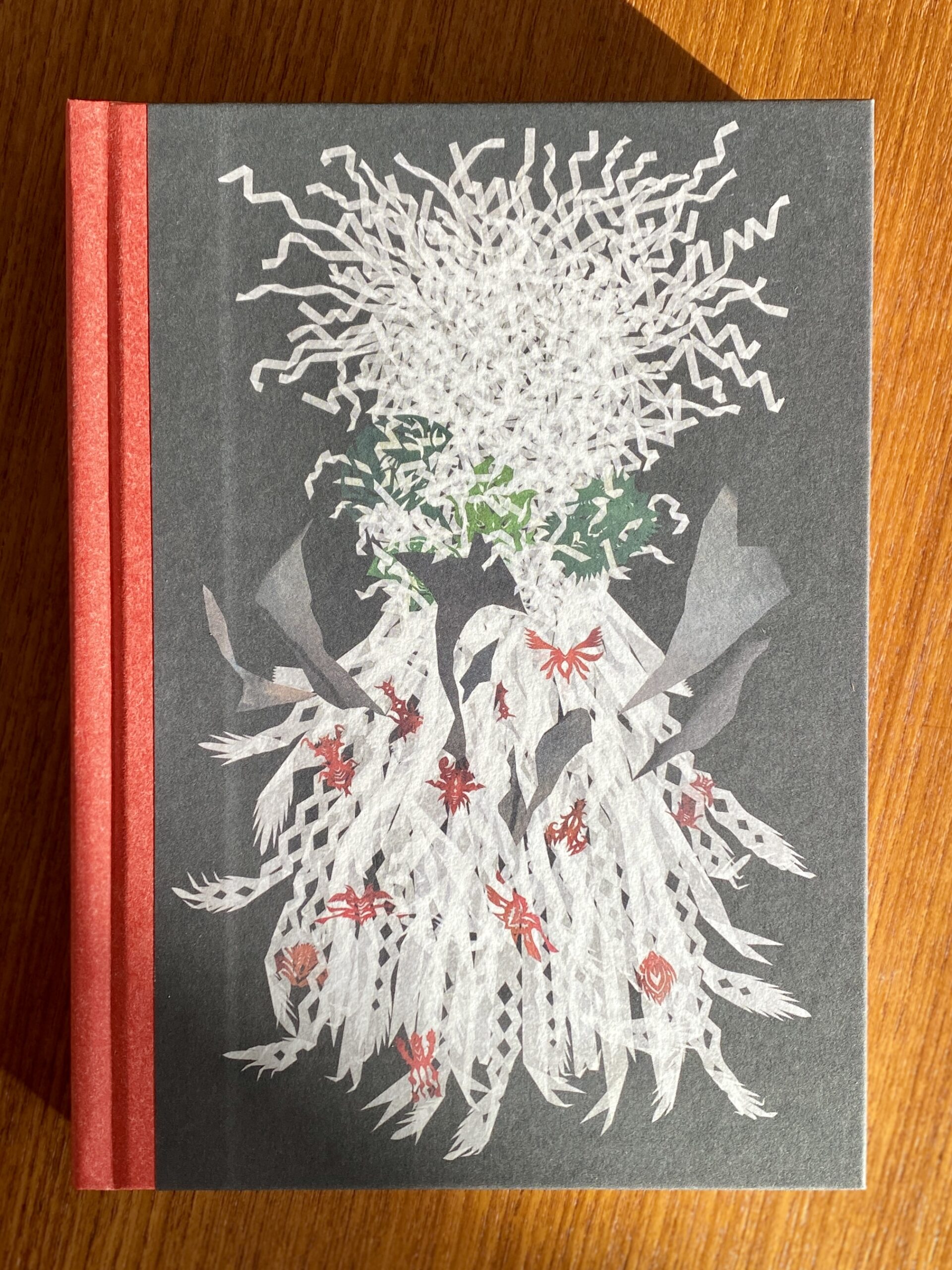 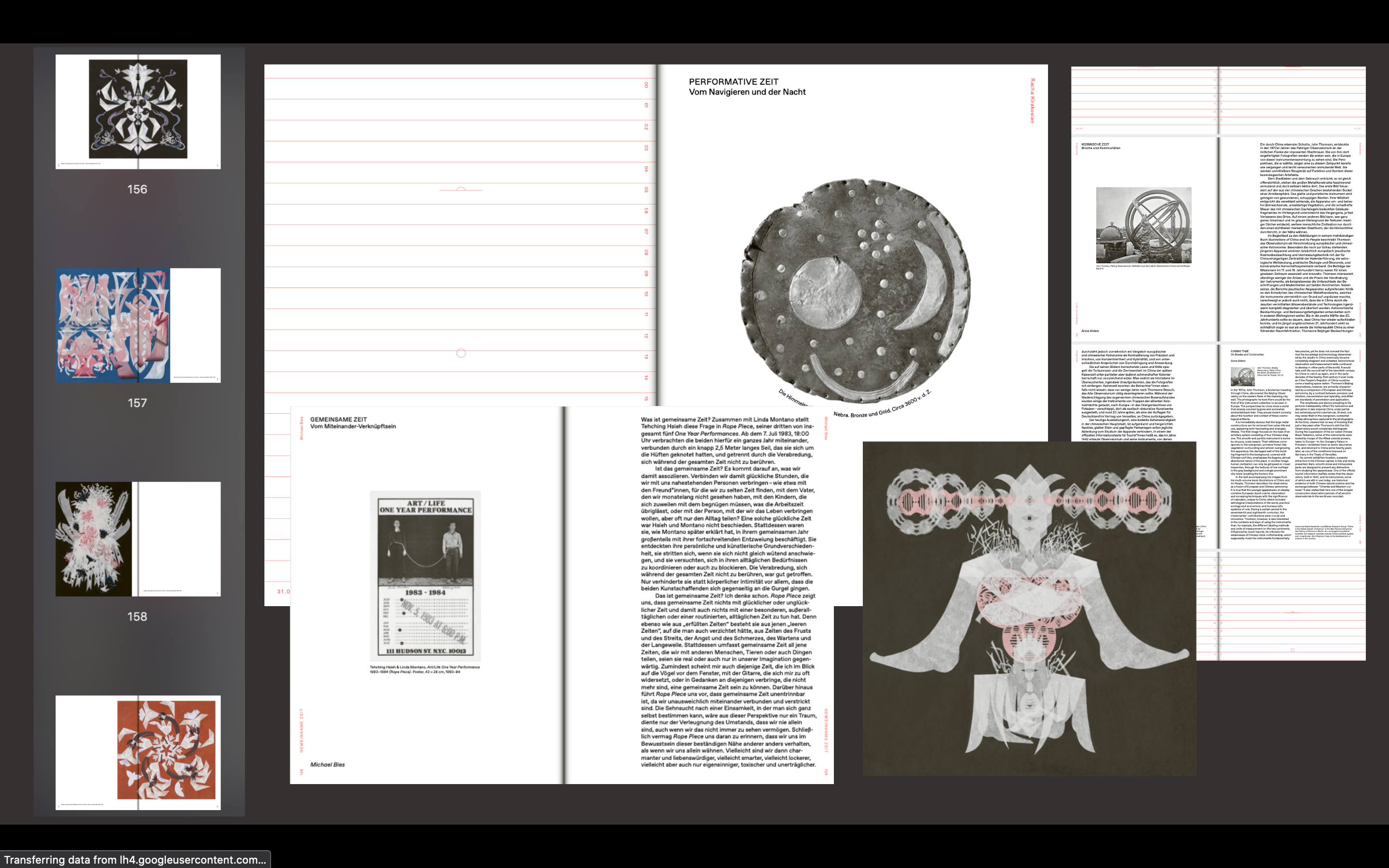 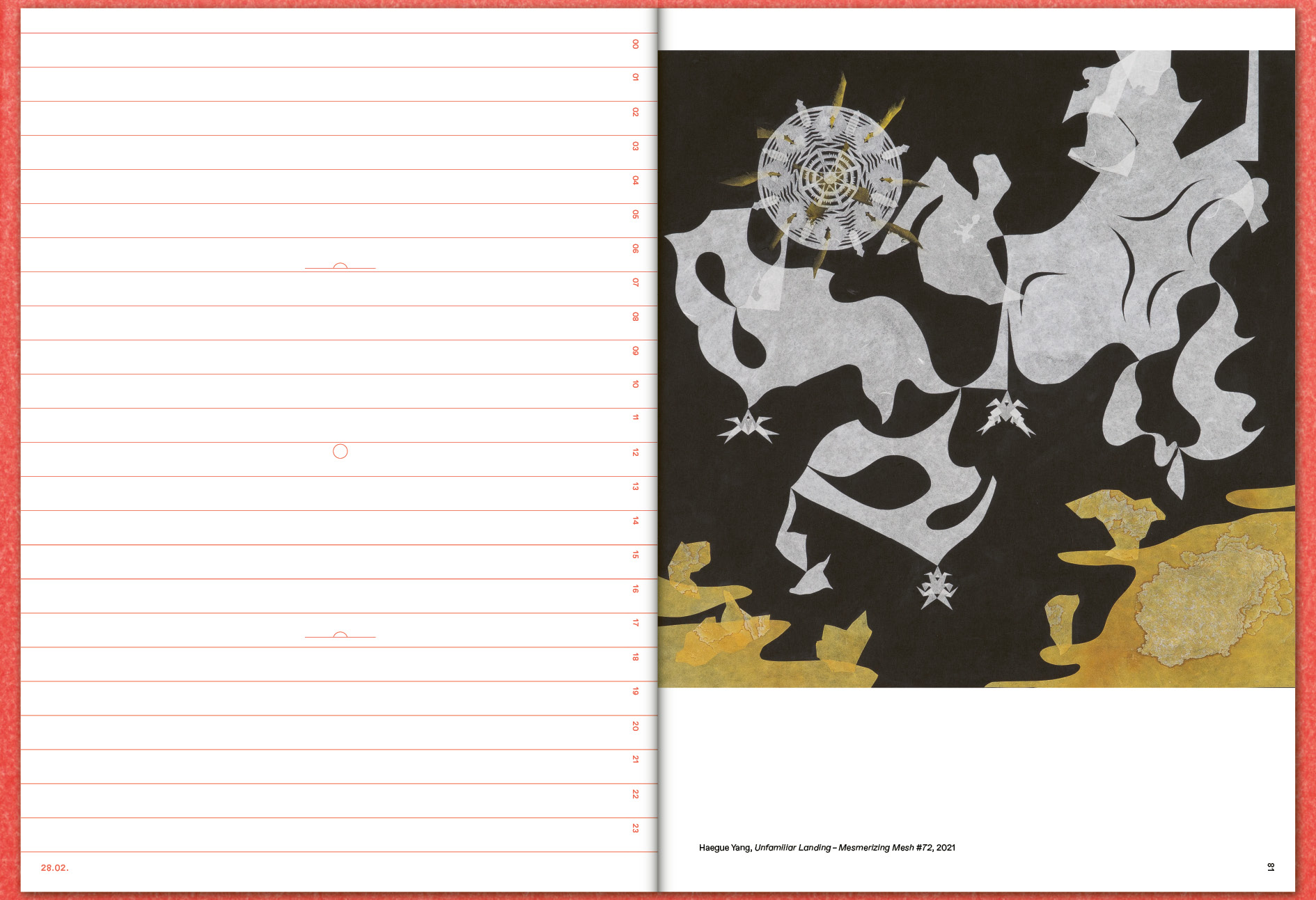 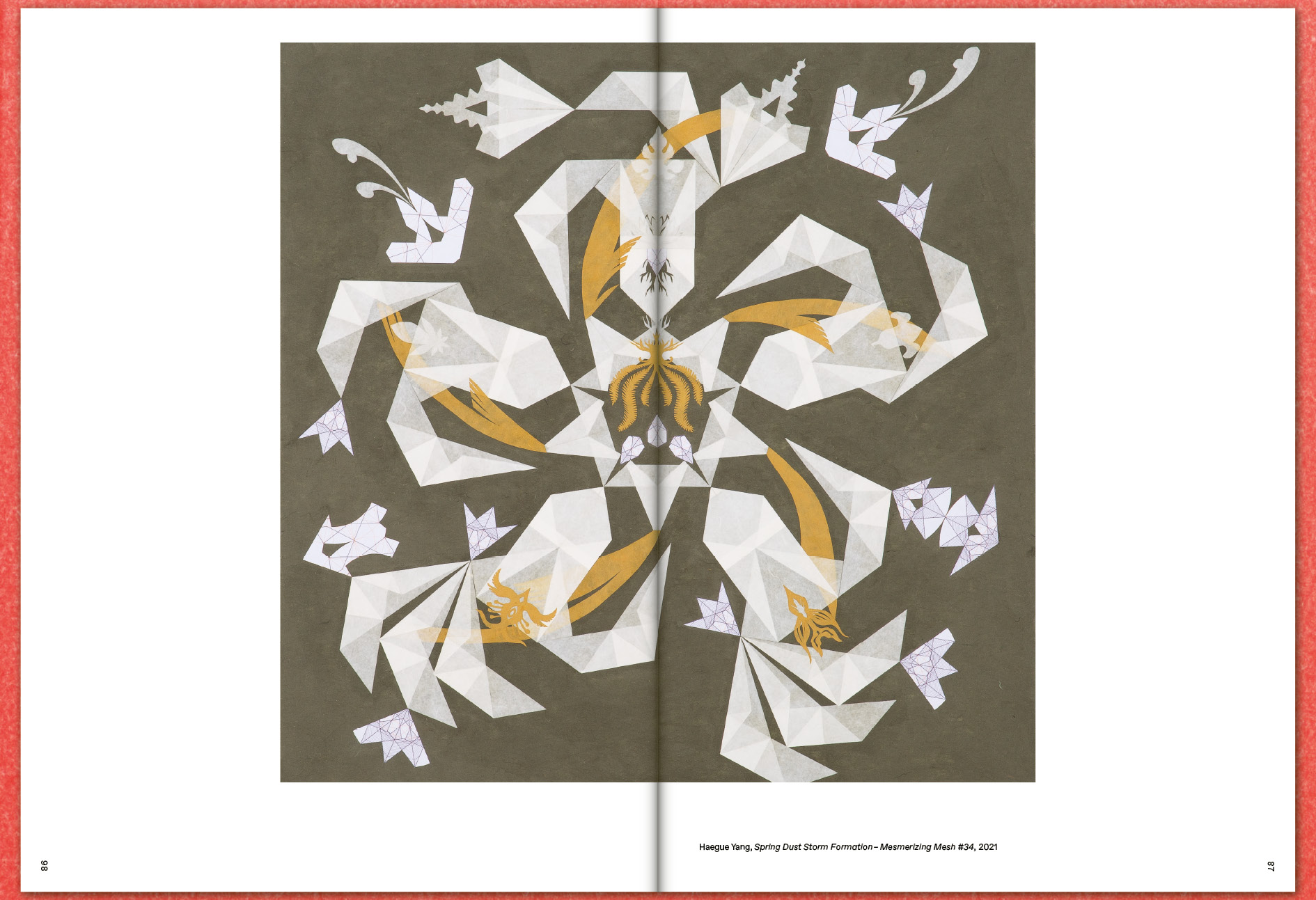 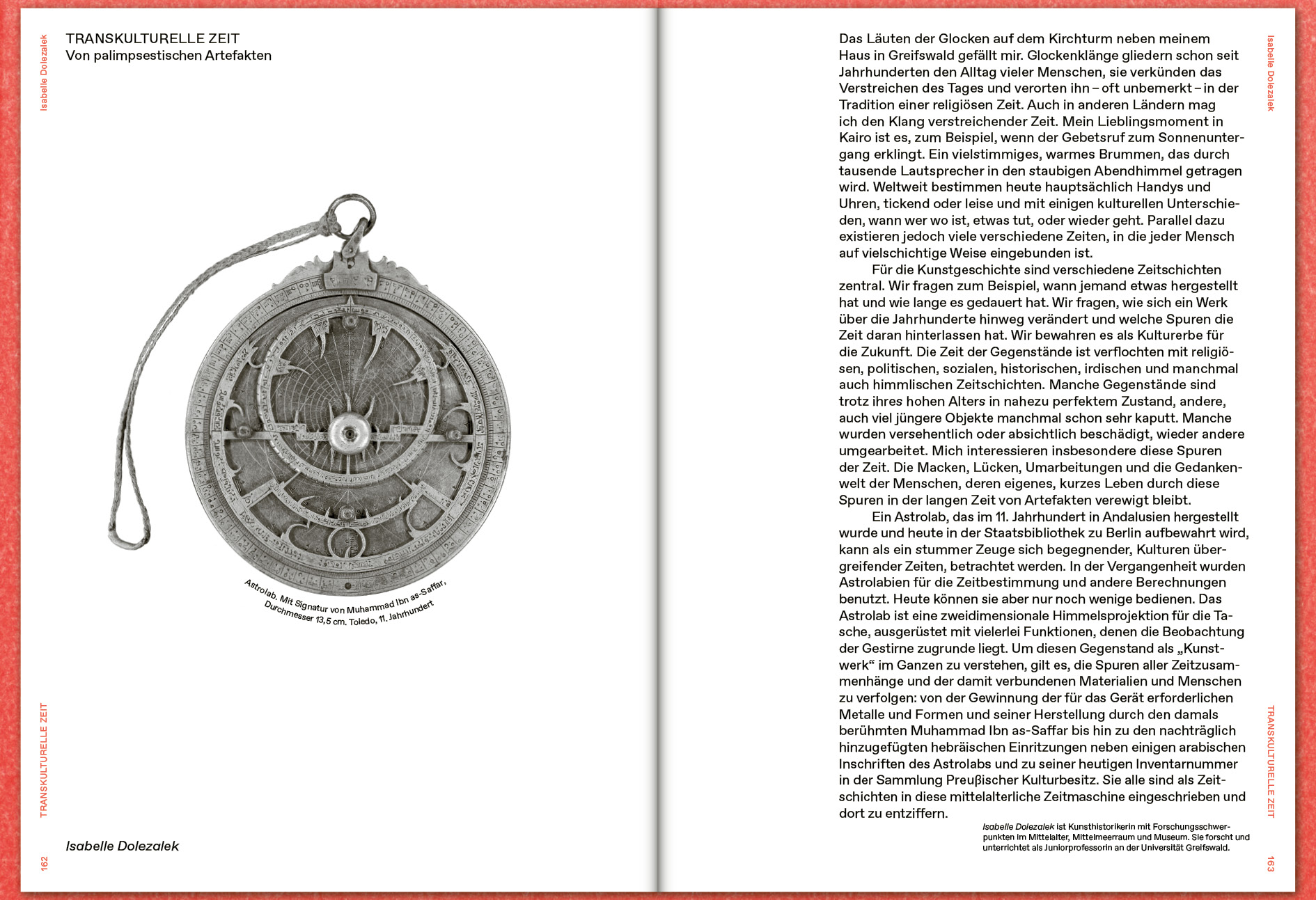 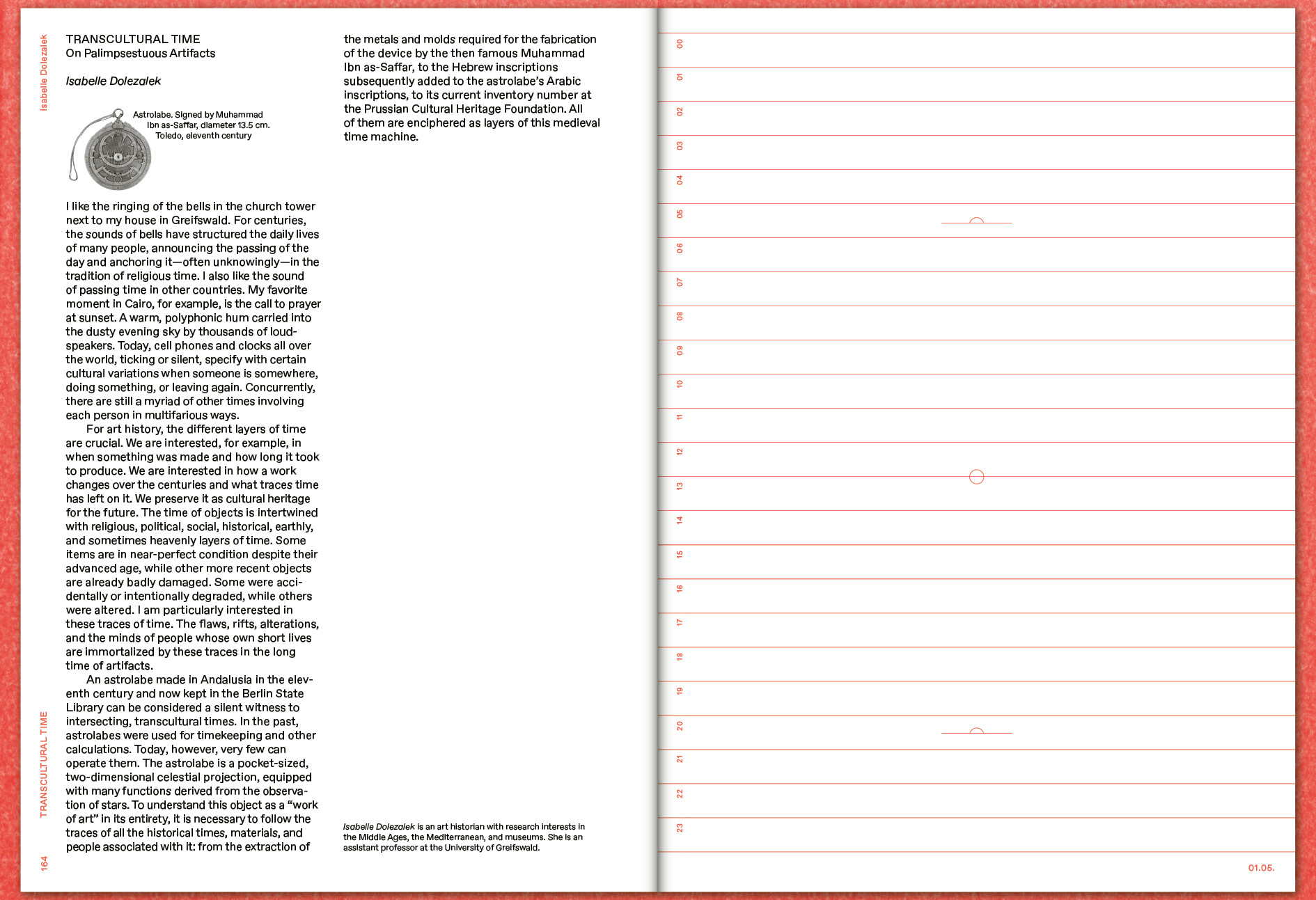 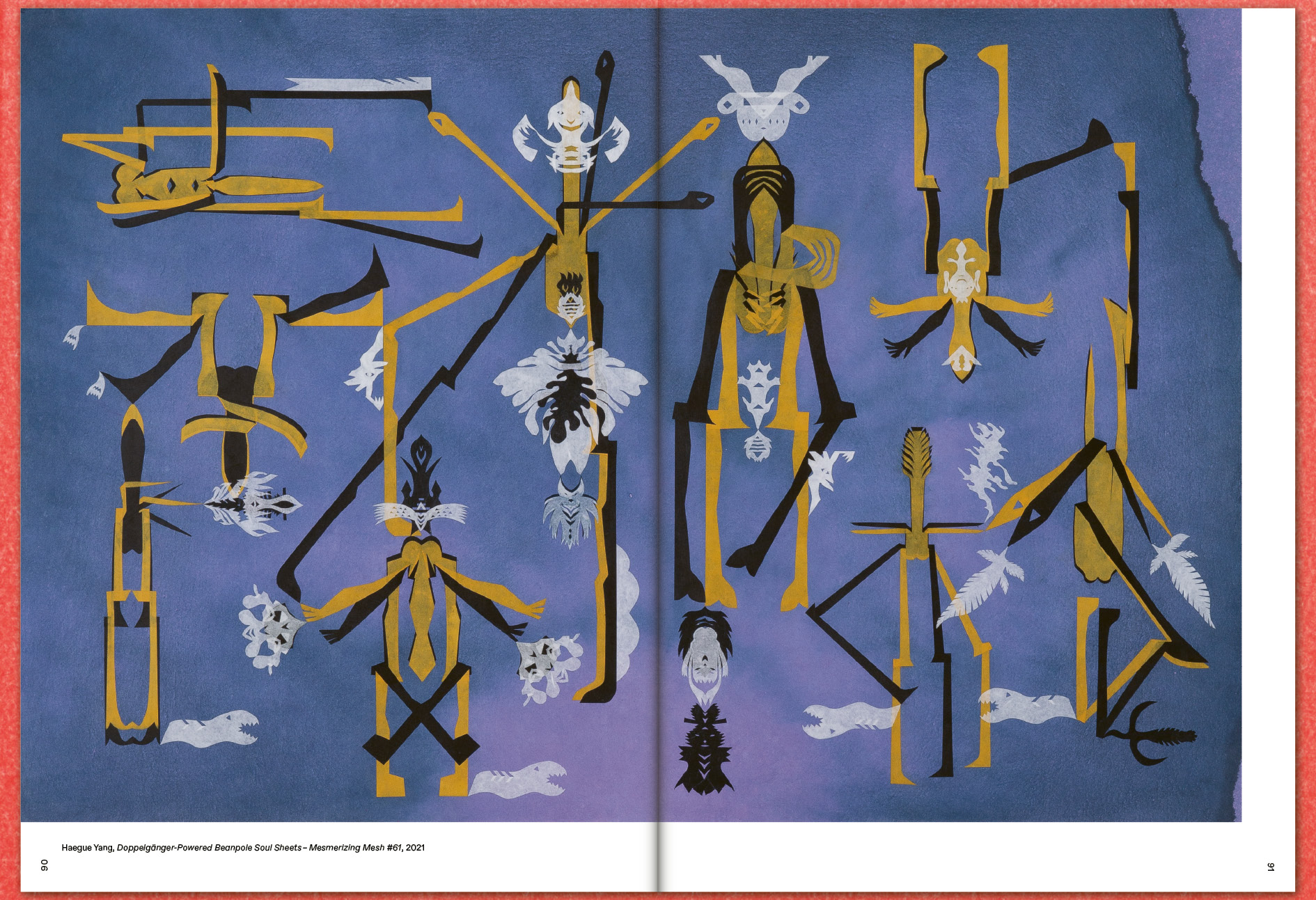 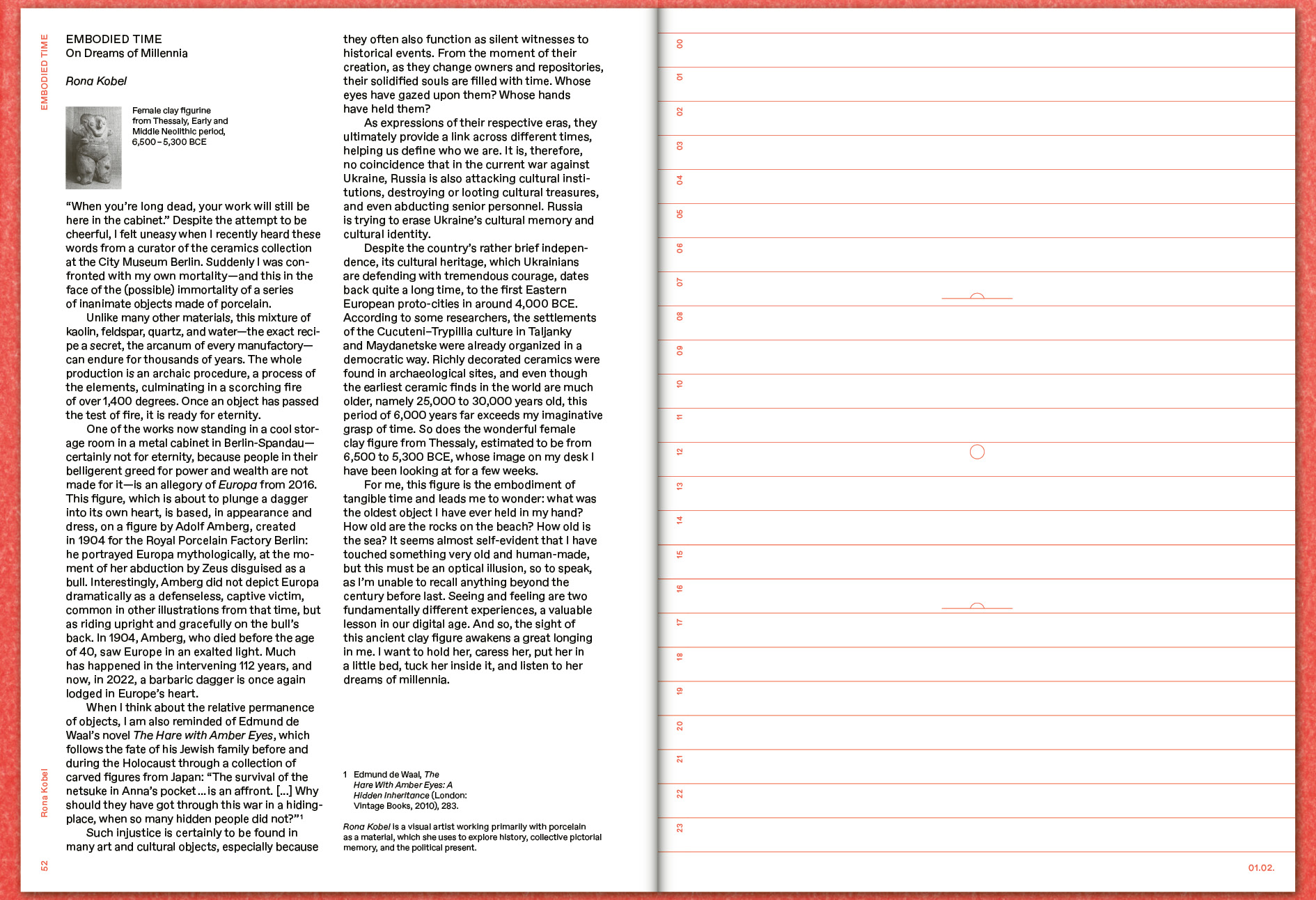 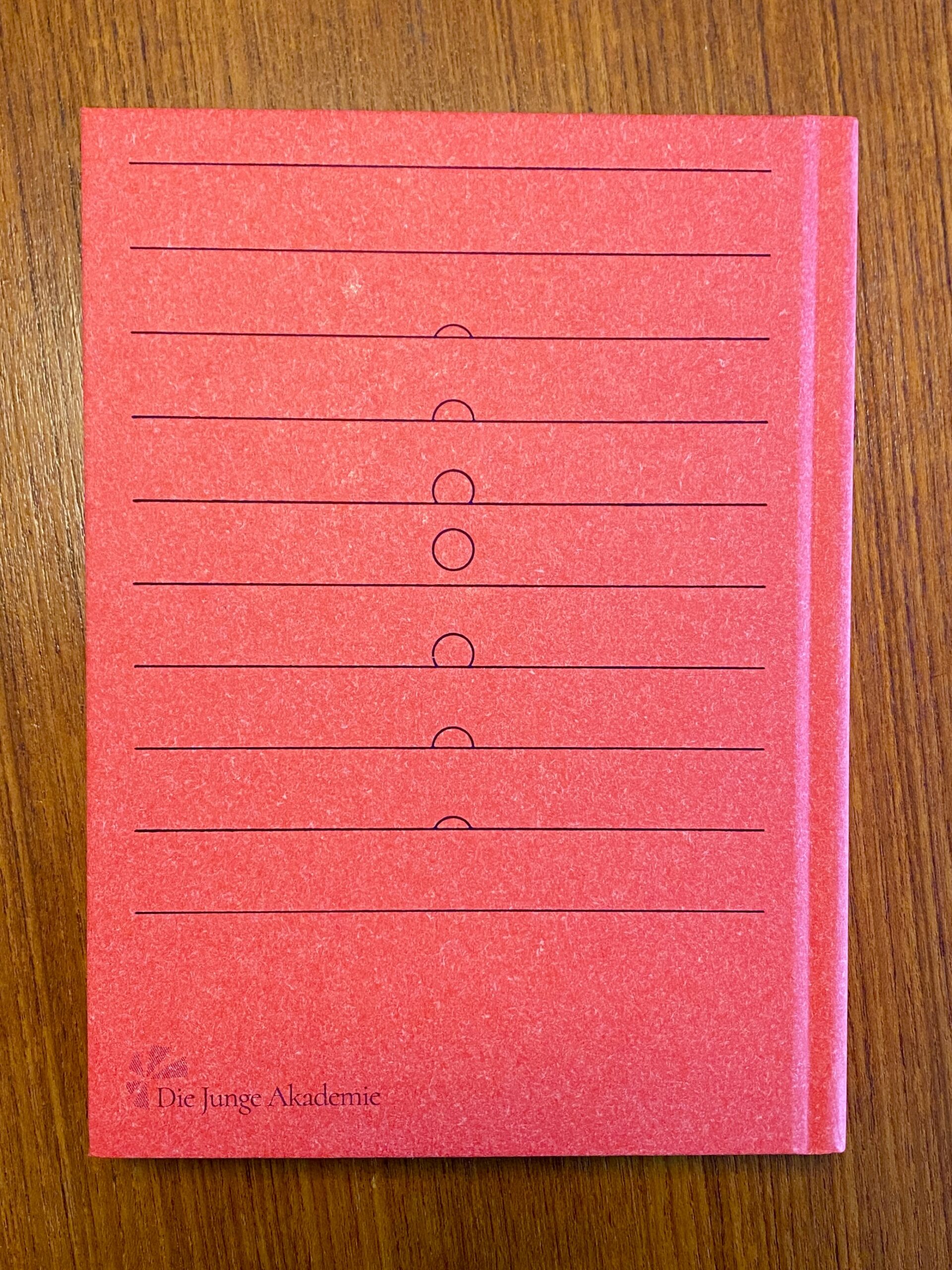 Can the calendar become a way to remind ourselves of our existential embeddedness in the course of nature?

For the first time, K. Verlag was commissioned to develop a book-as-calendar in this collaboration with Die Junge Akademie. Beyond its functional aspect as a daily notebook and calendar, 2023 – one day, one day at a time is an invitation to think about the concept of time, and to pause and recognize its flows and patters as integral elements of all life.

The publication is interspersed with seven meditations on the time's multidimensionality written by current members and alums of Die Junge Akademie—Rona Kobel, Michael Bies, Isabelle Dolezalek, Senthuran Varatharajah, Hermine Mitter, Racha Kirakosian, and Anna Lisa Ahlers—who each responded to one artifact selected for them.

These short, thoughtful pieces are published alongside selections from Mesmerizing Mesh, the latest series of works on paper by Berlin- and Seoul-based artist Haegue Yang. With exuberant titles such as Barbell-Powered Sunrising Soul Sheet Atop Another or Butterfly Windblast Arrow Formation, Yang’s intricate patterns of geometry dance forth in a play of ten thousand things—like a kaleidoscope uniting abstraction and form. Inviting us to contemplate how one folds in the multiple as the multiple enfolds the one, these artworks enhance our cultural literacy of living configurations, timescapes, and cosmic emergence.

As a collaborative experiment, this beautifully designed yearly planner intervenes into the calendar’s rhythmic fidelity to the Earth’s year-long orbit around the Sun with a series of idiorhythmic interruptions, diversions, and occasions for pause and reflection to remind us that planet, in fact, means wanderer.

DIE JUNGE AKADEMIE was founded in 2000 as the world’s first academy for outstanding young academics. Its members—who come from all academic disciplines as well as creative fields—explore the potential and limits of interdisciplinary work in new projects, aim to encourage dialogue between academia and society, and provide new impetus in discussions about scientific policy. Die Junge Akademie is supported by the Berlin-Brandenburg Academy of Sciences and Humanities (BBAW) and the German National Academy of Sciences Leopoldina. Its office is located in Berlin.

HAEGUE YANG, born 1971 in Seoul, Korea, lives and works between Berlin and Seoul. She serves as Vice-Rector of the Städel- schule, Frankfurt am Main, where she also graduated as Meisterschüler in 1999. Spanning a vast range of media— from collage to kinetic sculpture and room-scaled installations—Yang’s work links disparate histories and traditions in a visual idiom all her own. The artist draws on a variety of craft techniques and materials, and the cultural connotations they carry: from drying racks to Venetian blinds, hanji paper to artificial straw. She is known for her multi-sensory installations that activate perception beyond the visual, creating immersive experiences that treat issues such as labor, migration and displacement from the oblique vantage of the aesthetic.