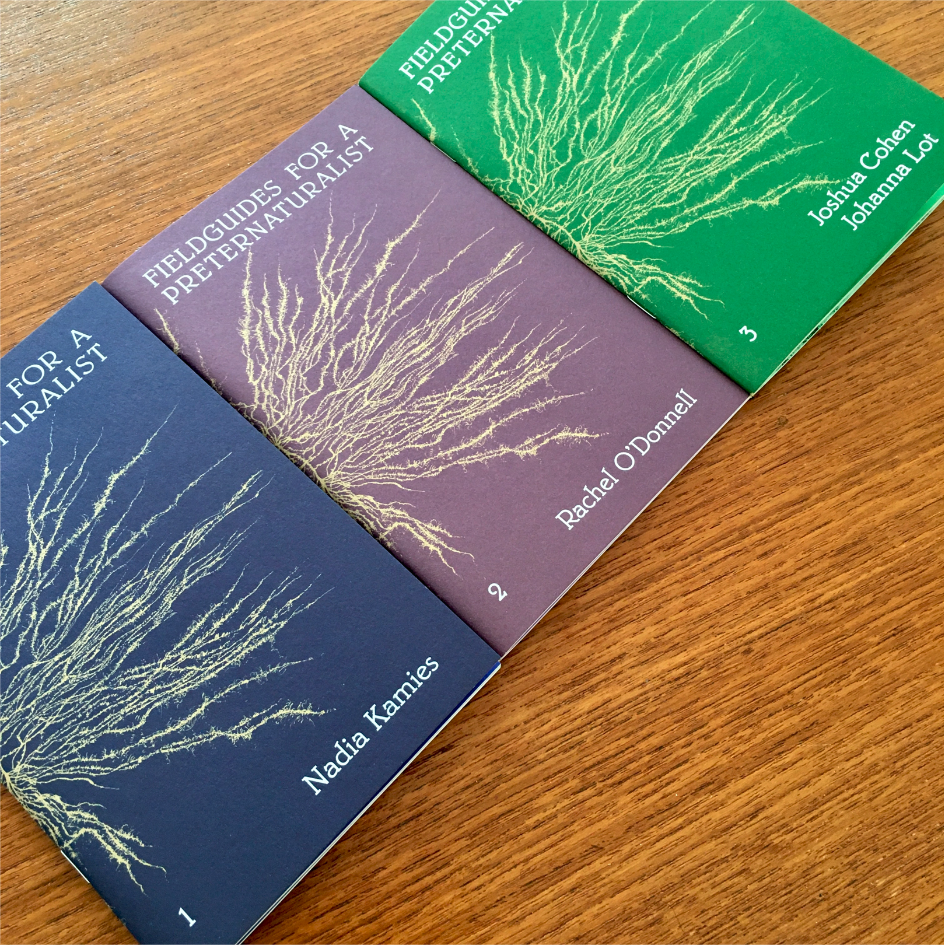 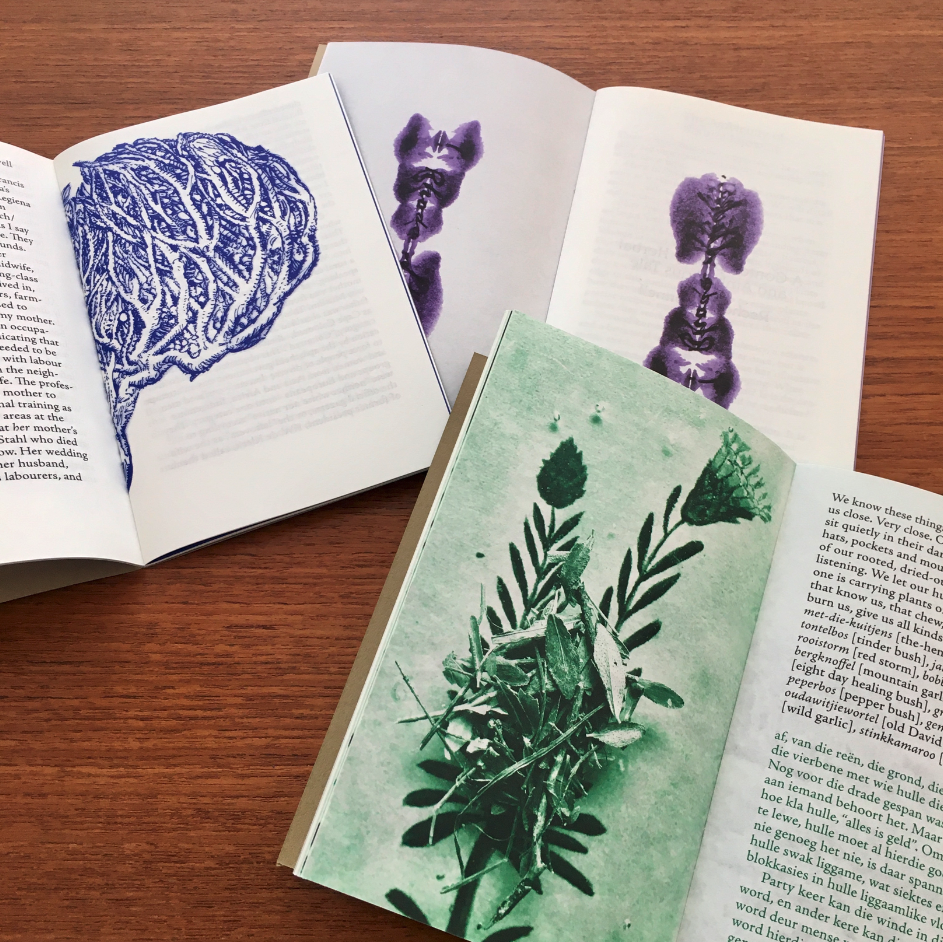 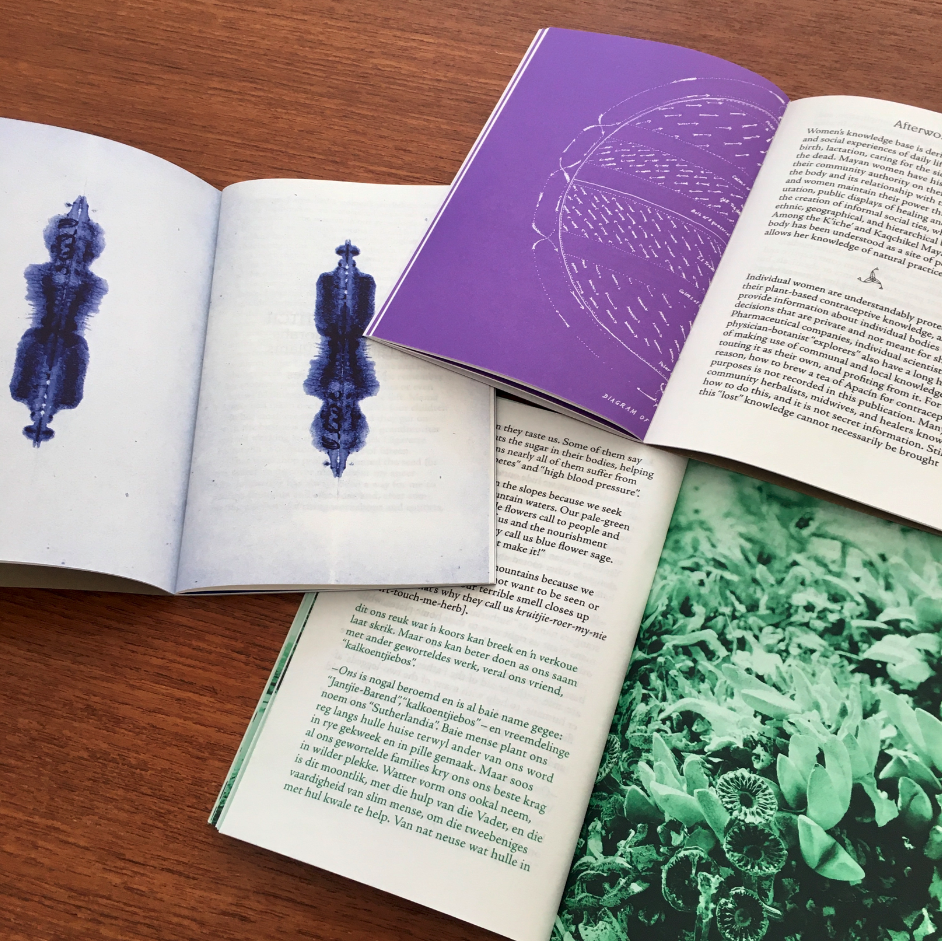 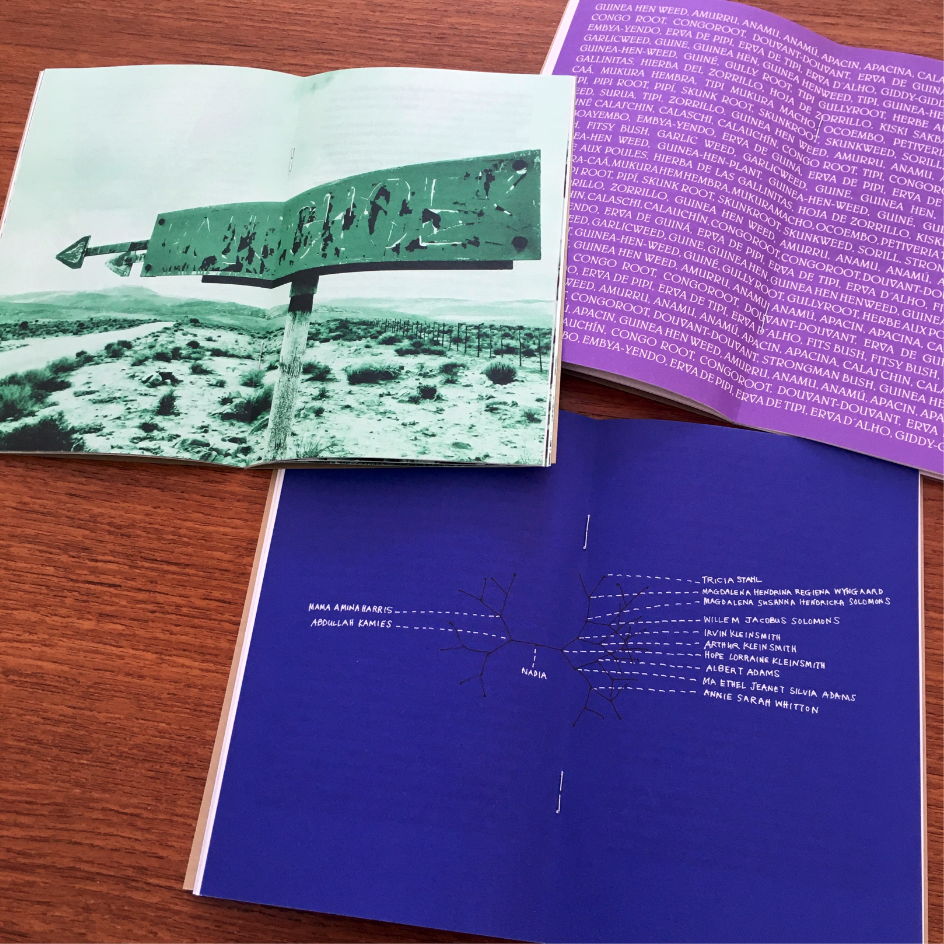 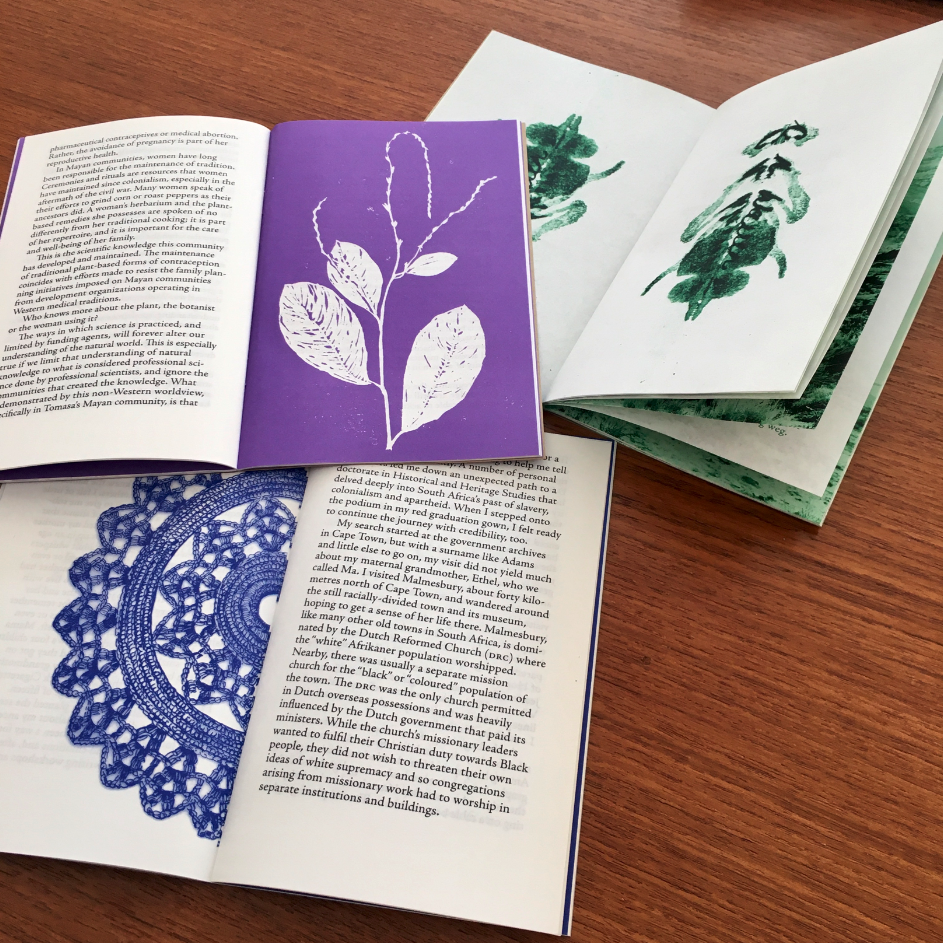 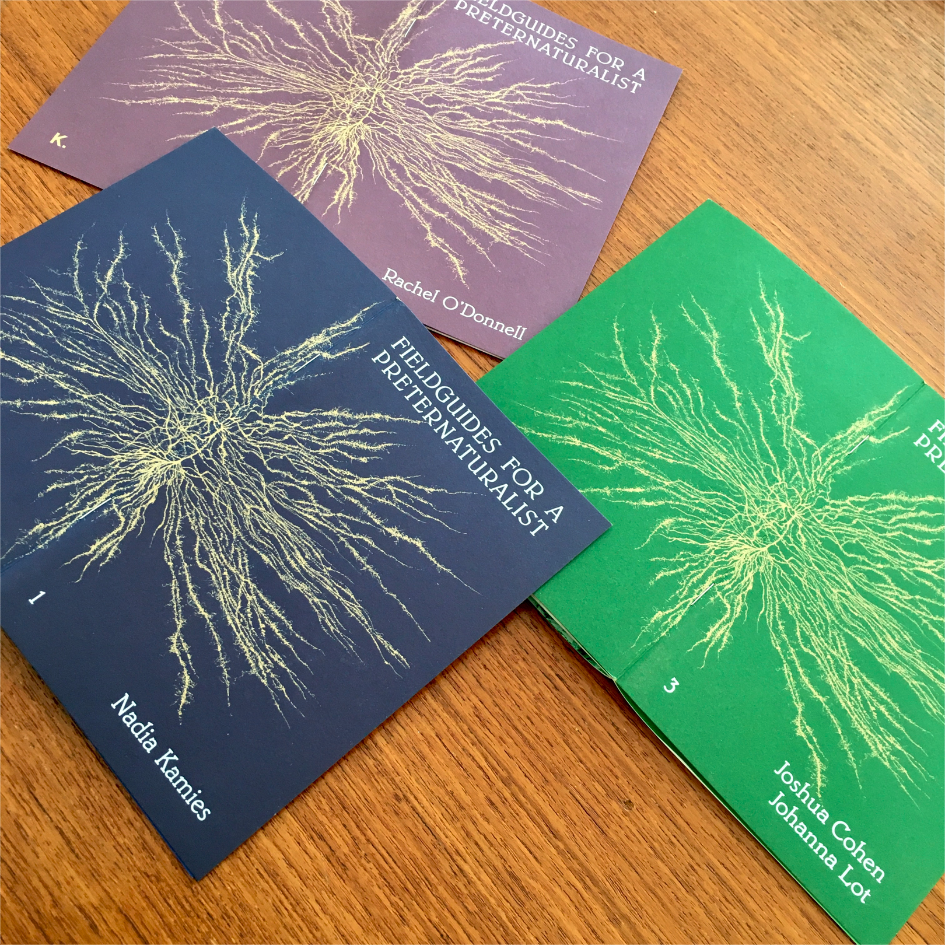 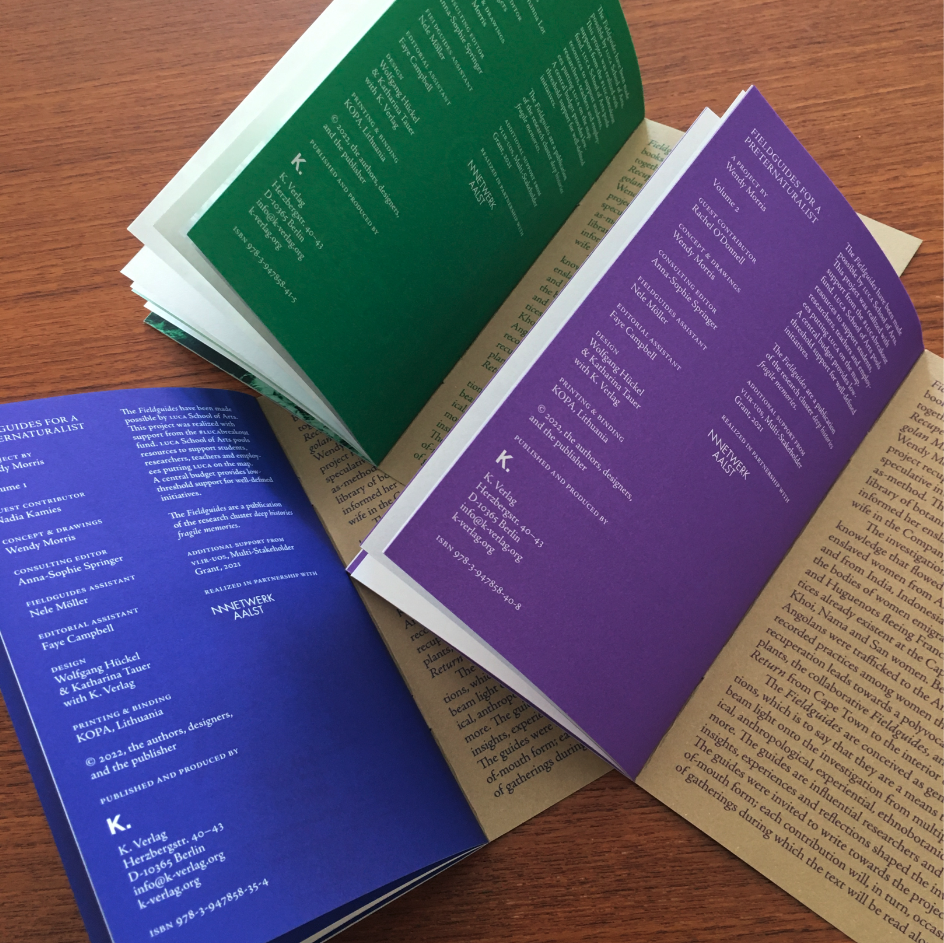 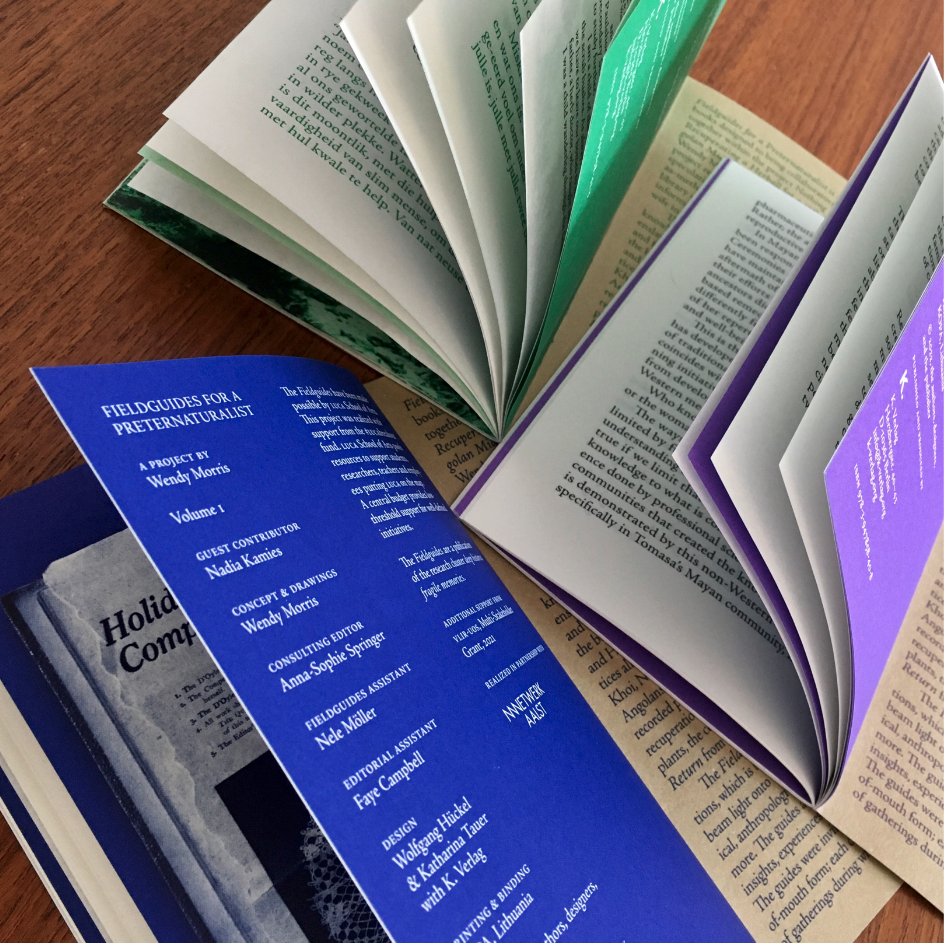 Fieldguides for a Preternaturalist is a series of small chapbooks initiated by South African artist Wendy Morris as part of her ongoing project Nothing of Importance Occurred: Recuperating a Herball for a Seventeenth Century Enslaved Angolan Midwife at the Cape. Combining historical and speculative research, the project is concerned with the missing narratives while approaching plants as archives and storytelling as method. It has as its focus the retrieving of a library of botanical-medicinal knowledge that might have informed Morris’s enslaved ancestor, Maaij Claesje of Angola, midwife in the Company Slave Lodge in Cape Town.

K. Verlag partners on the creation of a series of ten booklets, the Fieldguides, which are conceived as generators of collaborations, which is to say that they are a means to invite “guides,” or guest authors, to beam light onto the investigation from multiple angles by sharing their perspectives and historical, anthropological, experiential, ethnobotanical, literary work, and more. The series is launched with three volumes, including contributions by Nadia Kamies, Rachel O’Donnell, and Joshua Cohen & Johanna (Marianna) Lot. They were invited to write towards the project in a word-of-mouth form, and each contribution will, in turn, occasion a set of gatherings during which the text will be read aloud.

WENDY MORRIS was born in Namibia, grew up in South Africa, and lives in Belgium. She is an artist, researcher and teacher at Luca School of Arts, Brussels, and the Art History Department of KU Leuven and founder of the interdisciplinary deep histories fragile memories research cluster. Her work has a double focus on historical and transdisciplinary research and on the artistic and written forms in which this research manifests itself. Her current artistic practice comprises Travelogues, polyvocal Herbals, Audio-Eeries and Duets, clandestine Radioworks, and the Fieldguides. Wendy works as the Company, a constellation of organs and entities that has evolved as an artistic-fictive conceit in the investigation into the fragile history of her Angolan ancestor. Forfeiting a sense of wholeness and a single-point perspective, the focus of work has shifted towards a plurality of parts and beings that include the Wandering Womb, Muriel Emissary to the Past, Orlando Preternaturalist, and I, the Ear.

NADIA KAMIES was born in Cape Town at the foot of Table Mountain, not too far from the confluence of the Black and Liesbeeck Rivers, to Hope Lorraine Kleinsmith of Woodstock and Abdullah Kamies of District Six. Her early years were shaped by traversing the spaces between the homes of her maternal grandparents in Walmer Estate and her paternal grandmother in District Six. Before she found her way to storytelling, she worked with children as an occupational therapist, an aromatherapist, and a yoga teacher. Nadia publishes in Reclamation magazine and Perspectives of a Perennial. Her book, Expressions of Colour in a Black and White World: Growing up “Coloured” – Photographs, Traditions and Memories, published by Fourthwall Books, will appear in 2022.

RACHEL O'DONNELL was born in Northeastern Pennsylvania, but her work has been shaped by her time in rural Mexico, Costa Rica, and Guatemala. A Latin Americanist with a background in both literary and political theory, Rachel has recorded and published testimonies of women’s activism and leadership during the Guatemalan civil war. While working in Mayan villages of highland Guatemala, Rachel participated in many ceremonial traditions, including in ritual bathing in the temazcal. She shared a tea many women said prevent- ed them from becoming pregnant and began to think about nature, knowledge, reproduction, and mothering, which led to her research on plant-based abortifacients. As a political scientist, Rachel thought about the global politics of bioprospecting as she watched local women maintain and develop plant-based contraceptive knowledge, a stark contrast to the U.S. political climate around reproductive health and justice and contraceptive practice. Rachel did archival research on the history of early modern botanical exploration in the Americas, and then fieldwork in both Guatemala City and highland Guatemala. She now teaches these themes in the Gender, Sexuality, and Women’s Studies Program at the University of Rochester in upstate New York, in a class she titled the Global Politics of Gender and Health, where she highlights the role of everyday knowledge in health care practice.

Fieldguides for a Preternaturalist is a project by Wendy Morris. Fieldguides vols. 1–3: each with a text and drawings by Wendy Morris and an essay by Nadia Kamies, Rachel O’Donnell, and Joshua Cohen & Johanna Lot, respectively. Design by K. Verlag in collaboration with Katharina Tauer and Wolfgang Hückel.  The publication series is realized in partnership with Netwerk Aalst, Belgium.