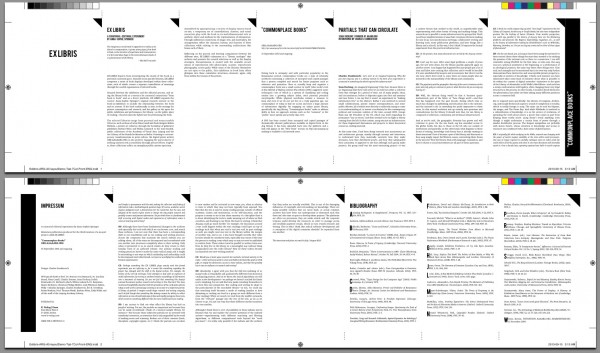 a curatorial–editorial experiment in various locations

Realized in the summer of 2013, the multi-part EX LIBRIS project departed from investigating the inside of the book as a potential curatorial space. Initiated from within a series of specific libraries, EX LIBRIS comprised a number of book displays developed within these collections, where each iteration created its own constellation of meanings through the careful organization of selected publications ranging from mass-printed monographs to rare artists' books and bound volumes to loose-leaf works on paper.

EX LIBRIS was purposefully situated between the exhibition and the editorial process. Using the library both as a resource for curatorial connections “from book to book” and as a direct platform, EX LIBRIS expanded our original research interest in the book-as-exhibition to include the relationship between the book and its context. If the book traditionally is seen as the strategy for private consumption and research, and the gallery as the space for public exhibition and performance, the library—as the public place of reading—thus becomes the hybrid site for performing the book.

Each iteration of EX LIBRIS was accompanied by an individual miniature accordion publication distributed for free in the exhibitions. These booklets include interviews with the respective “hosts” such as the gallerist and publisher Barbara Wien and Sean Dockray, the co-founder of the online platform Arg.org, as well as contextual information and a bibliography of the books engaged at each site.

A project curated by Anna-Sophie Springer with publication design by Charles Stankievech.

Free downloads of the publications on the following project pages.