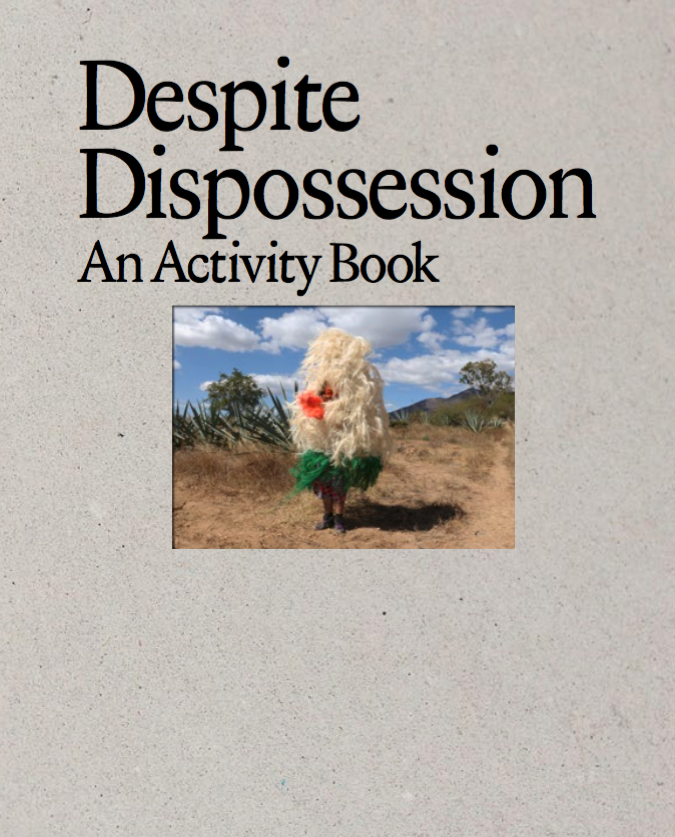 Despite Dispossession: An Activity Book

As transnational extractivism, neo-fascist politics, and economies of abandonment and disposability expand around the world, can we facilitate situated practices of storytelling and worldmaking that enliven futures propelled by the forces of indignation, desire, and relationality? Despite Dispossession: An Activity Book extends an invitation to restore and reinvent bonds of reciprocity with the land, humans, and non-humans, while envisioning transformative and shared horizons. This collaborative endeavor takes as its point of departure the contested realities and public struggles of the dispossessed.

Bringing together seven site-sensitive engagements, the contributors develop their artistic works, as well as speculative tools and activities, to conjure worlds to come in the ruins of dispossession. The result is a combination of subtle theoretical reflection, pluriversal modes of inquiry, and unruly epistemic intervention. Drawing its inspiration from decolonizing methodologies, Black aesthetics, and epistemologies of the South, the project gathers these influences for a novel experiment that demonstrates how arts-based researchers confront dispossession through itinerant practices of resistance.

Full color  with many images and playing cards

The publication is the result of the research project DisPossession: Post-Participatory Aesthetics
and the Pedagogy of Land hosted by the Academy of Fine Arts Vienna. It was made possible through funding by the Austrian Science Fund (FWF), project no. AR471, and co-funded by Fundação para a Ciência e a Tecnologia (FCT), Portugal.